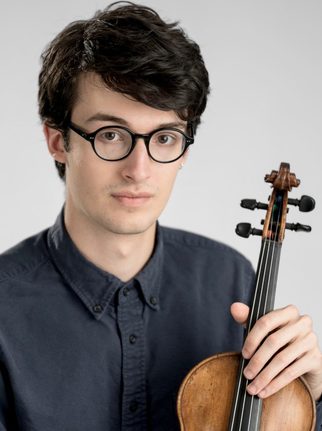 Fiercely committed to the music of our time, violinist Giancarlo Latta (Lead Teacher) is interested in the intersection and convergence of music old and new. Equally at home performing Mozart and Carter, Beethoven and Berio, Giancarlo has been involved in dozens of commissions and premieres and has collaborated extensively with numerous composers both young and established. He has worked with Marcos Balter, Mario Davidovsky, Pierre Jalbert, Aaron Jay Kernis, and Steven Stucky, among many others, and has performed in venues as diverse as the Rothko Chapel in Houston, Mariinsky II in St. Petersburg, National Sawdust in Brooklyn, and London’s Royal Albert Hall as part of the BBC Proms. He has performed with members of the International Contemporary Ensemble (ICE), JACK Quartet, Talea Ensemble, and New York’s counter)induction.
In spring 2016, Giancarlo curated and premiered “16×16: The Rice Encores Project,” a large-scale commissioning endeavor featuring sixteen new short works for violin and piano and showcasing the entire Rice University composition studio; a recording of all sixteen pieces was released in early 2018. Additional highlights of the 2017-2018 season include performances with flutist Claire Chase as part of Houston’s Da Camera, and residencies at the Avaloch Farm Music Institute (with pianist Robert Fleitz) and the Barnes Foundation in Philadelphia as part of the inaugural year of the Barnes Ensemble.
A founding member and principal second violinist of KINETIC, a conductorless ensemble in Houston, Giancarlo is passionate about music-making on a small scale, and particularly interested in the creative and collaborative possibilities of performing without a conductor. As an orchestral musician, he was a member of 2013 National Youth Orchestra of the United States of America, and has attended the Lucerne Festival Academy and the Aspen Music Festival. Additional festival credits include the Banff Centre’s Ensemble Evolution, the New York String Orchestra Seminar, the Contemporary Performance Institute at Wellesley College, and the Next Festival for Emerging Artists.
Giancarlo is currently pursuing graduate studies at Rice University, where he studies violin with Paul Kantor and composition with Anthony Brandt. He is a Da Camera Young Artist, performing and teaching in the Houston area through Da Camera Chamber Music and Jazz. He previously studied with Almita and Roland Vamos at the Music Institute of Chicago.